Reliable Exterminators is your local, 4th generation, same-family-owned Pest Control company. Our name says it all. We serve Lafayette and the 14 surrounding counties with personal, professional, licensed technicians. We’re not part of a national chain or company, which means better service and lower prices. 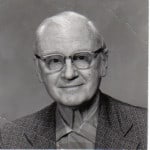 Charles also became involved in the formation of the National Pest Control and the Indiana Pest Control Associations. The business grew, and even during World War II, while Charles was away serving his country as a pilot in Burma, his manager, Harry Cochnower was at home in Lafayette tending to the business. After returning from the war, Charles constructed a new office building at 417 East State Street in West Lafayette, which was only the second building west of the Main Street bridge.

Employing many Purdue graduates over the years, Charles hired Jack Naugle to start up a branch office in Monticello. In 1957, Charles' nephew, Jim Hanstra, became the manager of Reliable, and it was business as usual, with dedication to customers and quality service. In 1971 Charles sold Reliable Exterminators to Jim and Jack. In 1975, Jim's son Bob started working at Reliable. 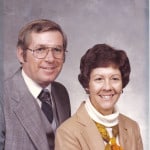 In 1982, 50 year old Jim Hanstra died of a sudden heart attack. His wife Phyllis and son Bob, now owners of Reliable, had one day to decide whether to sell or keep the company. Relying on faith and help from Dr. Gary Bennett and the Purdue Entomology Department, Reliable resumed operations. They met with the company's accountant and were told to expect a definite decline in business after Jim's passing due to his personal relationships with the customers. At the end of the next year, Bob and Phyllis met with the accountant again. He said, "I can't believe this. The business didn't even suffer a decline, but actually increased!" All thanks to the faithfulness of God! 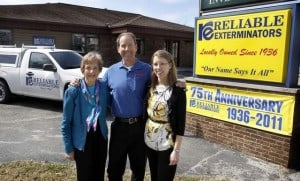 Phyllis, Bob, and Andrea in 2011 celebrating the 75th anniversary

In 1987, railroad relocation claimed the old office location, and the site for the current office at 1813 Main Street was selected, and the new office was designed by Bob. The construction was finished in July of 1989. After 40 years of service, Phyllis retired and welcomed granddaughter Andrea Patrie as her replacement, the 4th generation of local family ownership at Reliable Exterminators. In honor of the 75th anniversary of being in business, Reliable had its first open house celebration on April 2, 2011 to congratulate Phyllis, meet customers and friends and introduce Andrea. 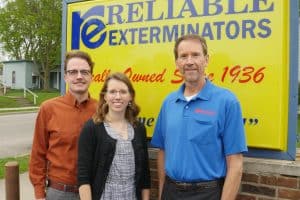 Currently Andrea is serving as Vice President and Bob continues as President. He enjoys running a pest control route and staying in contact with our customers.

We continue to be a family owned and operated company and treat our employees and customers with respect as we would our own family members.