As the holidays draw near, families will begin spending more time in their kitchens baking festive treats and snacks. This popular tradition can quickly turn into a nightmare if you find signs of pests, such as cockroaches, rodents or pantry pests like beetles and moths. Once inside your home, pests can spread bacteria and contaminate food surfaces and ingredients. To ensure a pest-free holiday season, Reliable Exterminators, with the help of the National Pest Management Association (NPMA), is sharing tips for homeowners to use to prevent pesky kitchen pests.

“Preparing for a busy holiday season includes pest-proofing your kitchen and not just decking the halls,” said Andrea Patrie, Vice President, Reliable Exterminators. “Pantry pests such as beetles or moths can quickly infest the food in your cupboards and even contaminate the baking ingredients your family will use when preparing holiday meals this year. Other pests such as mice or cockroaches can spread throughout the house, causing an even bigger issue and headache for people.”

Stop pests from ruining the holidays with these tips from Reliable Exterminators  and the NPMA:

If household pests are a problem, be sure to contact the local, qualified pest control professionals at Reliable Exterminators  for help.

To thank and celebrate our employees, Reliable hosts dinner and crazy bingo every year in December.  We had a lot to thank them for including 3 major anniversaries. Geanie (top left in teal shirt) has been advising our customers over the phone for five years!  Jeff (top far right) has treating pests in Rensselaer and Monticello areas for 20 years; and Jim (not pictured) has been serving the Lafayette and Attica areas for a whopping 25 years!  They each were presented with a commemorative plaque. 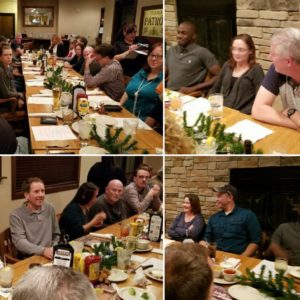 Our employees are the best! One usually does not seek out the pest control industry when dreaming of careers but in reality it can be quite rewarding.  Our customer service reps are often thanked for helping customers though challenging pest situations like finding bed bugs for the first time or discovering the source of persistent pantry pests.  They often share free advice to customers that call or walk in to the office for simple pest problems.  For more complicated pest problems, our CSRs schedule appointments for our friendly technicians.

Our technicians are the face…and hands and knees of the company. While they do get to meet our customers and be the heroes to catch the mouse or get rid of the ants, they are also the ones on their hands and knees in crawlspaces looking for termites and pests.  Our technicians aren’t afraid of getting dirty or going where no one has gone in 30 years, like a farm house attic!  We are grateful for their pest knowledge and persistence to keeping our communities and restaurants pest free!

Reliable wishes everyone a Merry Christmas and Happy New Year! 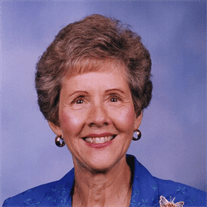 We are mourning and celebrating the life of our dear matriarch Phyllis Hanstra.  She has been instrumental in the integrity and legacy of Reliable Exterminators.  Once her husband Jim Hanstra purchased the business from his uncle Charlie in 1971, she became involved, supporting Jim, doing accounting, and making calls from home after hours. It wasn’t until 1982 that she became full time. After Jim’s sudden heart attack in 1982 at age 50, Phyllis and son Bob were faced with the decision to continue Jim’s work with the company or sell.  With faith in God, they chose to keep the company; and God has blessed it ever since.

Phyllis ran the office and route scheduling for 30 years.  She knew customers by name and had several phone numbers and addresses memorized.  With an impeccable memory, she knew where each technician was each day and how each account should be serviced.  She knew as much about insects as the technicians and advised our customers accurately. 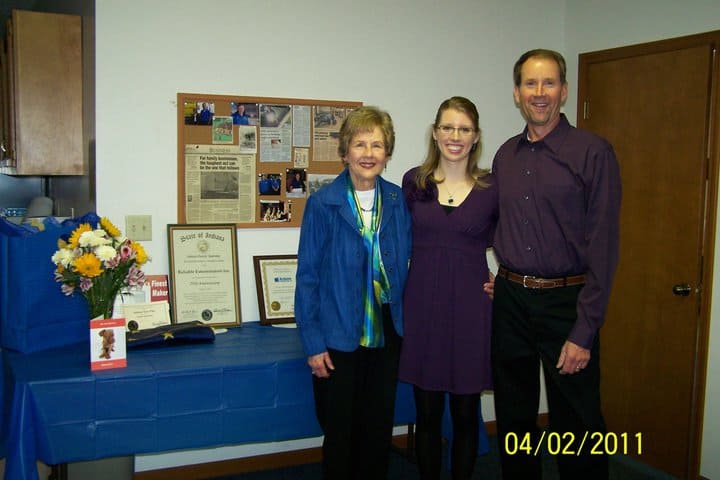 Phyllis loved getting family together, playing card games, and cooking.  She appointed herself as the welcome committee of her church, Sunrise Christian Reformed Church, and made a point to welcome every single new person, especially the twenty somethings.  She hosted dinners several times a month at her house, cooking for up to 30 people sometimes. 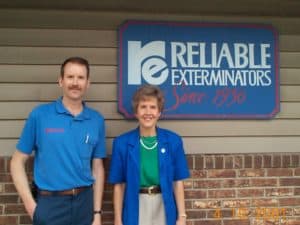 Phyllis peacefully went to heaven Sunday morning to be with Jesus and her husband Jim. She was surrounded by her family the week before she went. It’s been 35 years since she saw her husband, and I’ll bet they’re having a great time together again now.

She will always be remembered in our hearts and her legacy will continue at Reliable Exterminators.

Phyllis Jean Hanstra, 84, of Lafayette passed away on Sunday, October 8, 2017 surrounded by her family at Franciscan St. Elizabeth East Hospital.

Phyllis was born August 19, 1933 in Lafayette to the late Fred and Dorothy (Vanderkolk) Sietsma. When Phyllis was just 19 years old, she flew to Alaska to marry the love of her life, Jim Hanstra. The couple lived in Alaska for the next 18 months and soon had their first child, Nancy. 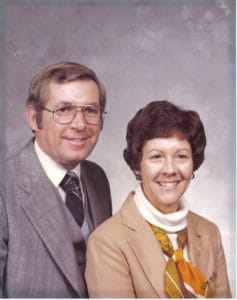 After returning to Lafayette, Phyllis and Jim eventually became owners of Reliable Exterminators in 1971. After Jim’s death in 1982, Phyllis faithfully worked in the business with her son, Bob. She retired in 2011 when her granddaughter Andrea joined the business.

Family and friends are welcome to visit on Tuesday, October 10, 2017 from 4:00 PM to 7:00 PM at Sunrise Christian Reformed Church, 909 East 500 South, Lafayette, IN 47909. Funeral services will follow at 7:00 PM officiated by Pastor Randy Bergsma. Private interment will take place on Wednesday at Tippecanoe Memory Gardens. In lieu of usual remembrances, memorial contributions may be directed to Sunrise Christian Reformed Church, Lafayette Christian School, or the Community Cancer Network.

If you live in any of the northern counties in our service area (Jasper, White, Benton, Newton, and Pulaski), you’ve probably seen Jeff.  He’s been driving a Reliable truck up there for the past 20 years, but most people only know him as “the bug man”. 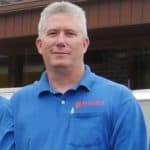 The year was 1997 when we set Jeff loose on the northern territory.  He is quite the salesman and has sold so many pest control jobs that we’ve since hired other technicians to help service the northern counties!  He says his favorite thing about his job is the freedom to do what needs done to meet the needs of his customers.  As a company we provide our technicians with the knowledge and materials needed for each job.  The technician gets to decide how he or she will solve each customer’s specific problem.

Jeff has seen it all when it comes to pest control problems.  He, along with all our technicians, attend training sessions to learn the most current pest management techniques and products.

Jeff and his wife Pam at our 2016 Christmas party

Jeff is married and his children are grown.  He puts family first and then work.  The most famous person he’s met is Mel Gibson.  Jeff’s favorite snack is fruit although he’s known to enjoy a few Little Debbie treats for breakfast every now and then!

Jeff, thanks for your 20 years of loyal service!

Often when a customer calls and gives a compliment to one of our technicians, we write it down on a goldenrod, star shaped paper to show the technician and post to our bulletin board.  We love hearing feedback from our customers and the technicians are really encouraged by the praise!  I’d say we get more compliments by phone than any online review sites. 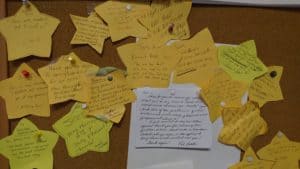 Our excellent reputation has been built by 81 years of honest, reliable service and also by word-of-mouth.  We consider it the highest compliment when a customer refers us to their friend or colleague.  I know that neighbors tell each other about our Homecare Programs that prevent unwanted pests.  Businesses refer us to new local businesses to keep roaches, mice, and flies out of restaurants, stores, and factories.  Realtors will often tell new homeowners about our safer and effective termite treatment and renewal program.  We can’t thank everyone enough for their support of our family business and on going patronage!

The “gold star” bulletin board was getting crowded. As I removed the older compliments to keep the most recent, I was just so moved by the kindness of our customers to call in and thank us.

Here are some of the  best things they said about our technicians:

We are so grateful for the appreciation of our customers!  Thank you for allowing us to serve you.  We are blessed by your kindness!

I’d like to introduce each of our staff members through a series of blog posts.  We have phenomenal people that work for us and I hope to spotlight each one!

Our first employee spotlight is about Geanie.  She has been with us almost 5 years and is the only office staff employee who worked with our matriarch, Phyllis Hanstra, before she retired.  Geanie was hired as a Customer Service Rep in the fall right during the busy “lady bug” season.  Phyllis was part time, Andrea was doing the schedules but about to go on maternity leave, and Bob was getting ready to sub as the main scheduler.  Geanie learned quickly how to answer calls and schedule appointments. She is now our most experienced Customer Service Rep and will probably be the one to answer your call!Geanie is from Clarks Hill, with a population of 665.  She is married, has 2 children, and 3 grandchildren.  One thing she simply can not resist is hugging her grandchildren!  A fun fact is that Geanie met the song writer Tom Kelly, famous for writing “Fire & Ice” in 1981 for Pat Benatar.

Geanie adds creativity to our office and enjoys dressing up for Halloween.

Sometimes its fun to be a “bug” man or lady.  Last week Reliable Exterminators held our annual Christmas party.  We reserved a room at Walt’s Other Pub and were served a delicious dinner with appetizers, drinks, and dessert!  Around Christmastime we always serve a big meal for our employees and summarize the highlights of the past year.  This year Andrea spoke of our history. About half our employees have been here less than 5 years and the other half have been here 10-35 years.  There’s a bit of a gap!

Andrea spoke of our history to remind everyone of our roots.  Andrea’s great uncle Charlie Partlow founded Reliable Exterminators on a simple philosophy: be honest, provide quality service at an affordable price, and stand behind our work.  For over 80 years we have been doing this and we will continue to it for many more.  Andrea spoke of the transition between 2nd generation Jim Hanstra, after he suddenly passed away, to his wife Phyllis Hanstra and her son Bob.  Despite his sudden and unexpected passing, the business didn’t suffer any financial losses the following year.  In 2011 Phyllis retired and 4th generation Andrea took her place.  Now Bob is training 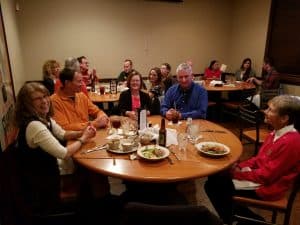 his daughter Andrea to run the business and prepare for his future retirement.  Throughout all these transitions, God has blessed us with continued growth!

To thank our employees, we played Bingo! 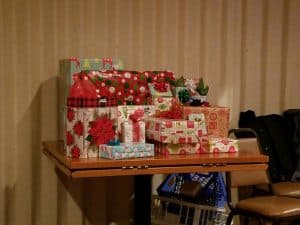 When each bingo was called, the person could choose a wrapped gift from the gift pile or steal a wrapped gift from someone who previously won a bingo.  We never clear the bingo board so about halfway through the game multiple people are shouting “bingo!” and taking presents from each other!  It’s great fun!  The favorite mystery present was the large box in the picture below.  Everyone wanted it and no one knew what it was! 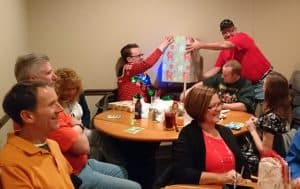 In the end everyone took home a present and had an enjoyable evening!

P.S. The big mystery gift was a shop vac!